Proclamation by the Antiauthoritarian Movement

Reviewing the past fifteen years since 1999 and particularly the conjuncture of the new global and multilevel social movement, we may easily observe that the project of social autonomy has been infused with a new compactness and content. In the brief period of the anti-globalization movement spanning between Seattle (1999) and Thessaloniki (2014), the political discourse of those at the bottom have acquired a global audience, complemented by the Paris and London uprisings of the excluded, who posed their questions before all aspects of political thought. Following these the December 2008 insurrection in Greece promoted new forms of public discourse, disrupting the temporality of the status quo on all levels. A harbinger of the unrest to follow in the ensuing years, this insurrection shook up the bedrock of the state’s authority, as it advocated the demand for a free and social public space. The struggles of the residents in Keratea and Halkidiki, the confrontations for urban space in Athens and in a number of other Greek cities emerged as the results of rifts triggered by the December 2008 insurrection, thus widening the field of action for the movement already pursuing the cause for local autonomy. In this framework no faction with ideological or identity politics could avoid decline in appeal. 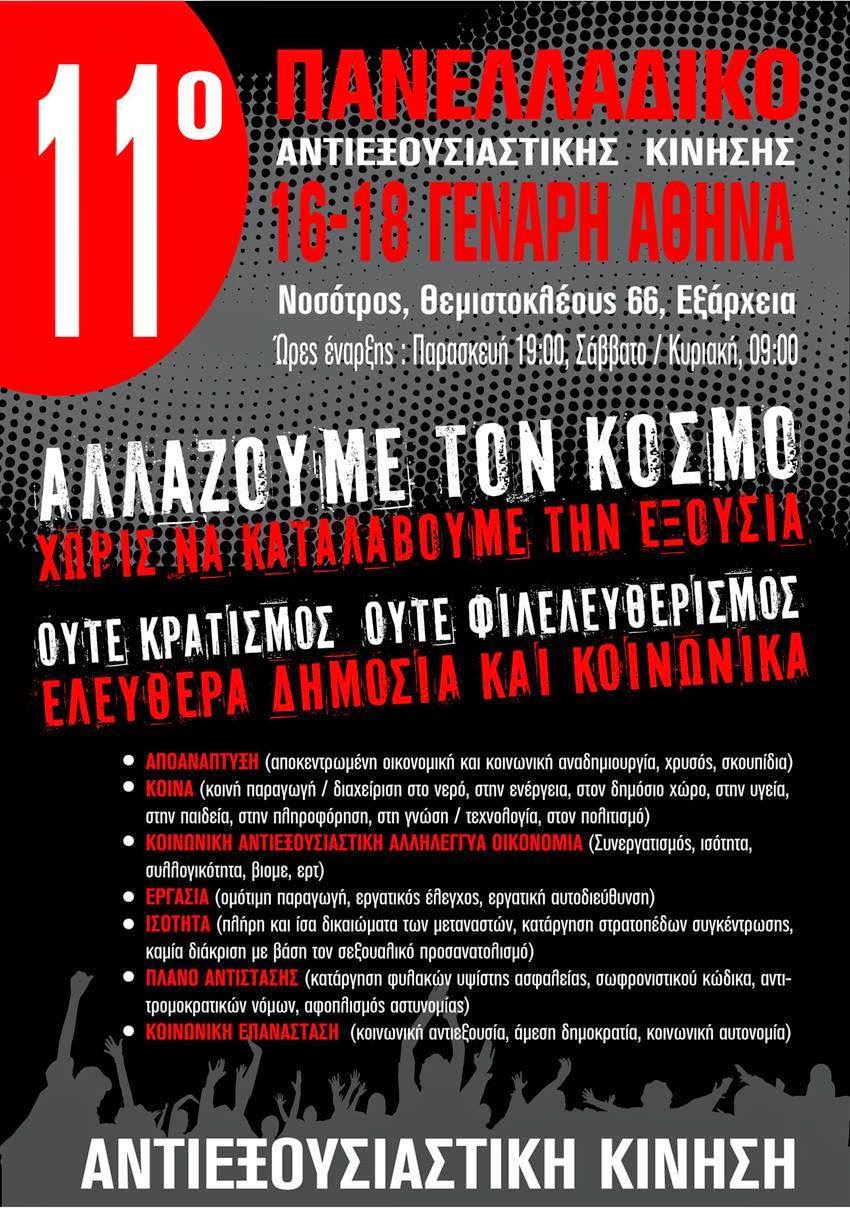 The messages of this socio-historic breakthrough paved a course of universal interaction. In this rather brief period of time the Arab Spring, the Occupy Wall Street protests, the Movement of the Urban Squares advanced the alternative of power beyond the identification of authority with the state. Direct democracy came onto the scene as a proposal by the processes themselves that unfolded on the squares. Far from merely replicating the authoritarian structures of the status quo, all these actions developed as a part of a formation process of a public space and time, setting up at the same time the movement’s own structures of self-government.

Society’s reaction to the crisis of growth and the unavoidable concomitant economic crisis is a political response that confirmed and deepened the ruptures brought about by the December 2008 unrest. A new political movement is being born with global references and no prevailing hegemonic discourse, despite the electoral and military domination of fundamentalists in the East who of course forced themselves from outside the context of the democratic Arab Spring. The new significations of this social movement are expressed in the schemes exploring the organization of human activities. In sharp contrast to the pillaging of the societies in developing Asian and Latin American capitalist countries, communal forms of life are appearing once again. In the old Western capitalist world, new forms of social networking and local autonomy are invented in the fields of production and consumption and the fields of communication and cultural products. The Commons have now assumed a universal designation, as they emerge as the seeds of new communal forms of life, agents of a renewed expression of the project of social autonomy.

In this wild global capitalist context, people regenerate a public space and rediscover a public time, by opening up new roads to freedom. Having relinquished the role of guarantor of living conditions, the nation-state in this ferocious global capitalist setting surrenders its competence of statecraft to the forces of the market economy, by re-establishing itself as a mutated procedural intermediary for global finance. The nation-state is just an authority overseeing global population migration, a state controlling and repressing social resistance through its enhanced police-state role.

Distanced from any kind of closed and exclusionary political practice in its eleven years of operation, the Antiauthoritarian Movement has marked a course associating itself in all movements in the social field, far from the logic of abstract ideological unity. As an integral part of the radical movement in recent years, the Antiauthoritarian Movement has actively participated and continues to do so fighting on the frontline of social confrontation, advancing alongside society the social-historic demand for direct democracy. Without any anticipation of the emergence of a totalizing society to be etched on the canvas of history, we at the Antiauthoritarian Movement, in adherence to our aspirations, spearhead as a priority the taking of power from the embrace of the state and its appropriation by distinct social self-institutions, reflecting on the change of the world beyond the seizure of state authority. New horizontal cooperatives and free social spaces weave into the social fabric new radical spaces for free social expression of collective creativity.

In our attempt to elucidate the contradictions generated by the alienation of reformist tendencies and the futility of totalizing revolutions, we trace the project of direct democracy here and now through the very praxis of this project.

The upcoming change in the parliamentary party forces in the aftermath of the January 25 elections in Greece is an effort on the part of the political system to express the radical changes in Greek society realized by the unrelenting social struggles in the previous period starting from the December 2008 insurrection, continuing on with the 2011 Movement of the Squares and culminating in the big demonstrations in 2012. Our break from the electoral game has always been and still is apt and non-negotiable under the present conditions. In the pre-election campaign period it became apparent that the social democratic political challenge was enormously different from our own project. However, in the face of the sweeping political hegemony of SYRIZA and the deafening silence of the movement at-large, two dangers are lurking: on the one hand, the danger of incorporation in a governance agenda and secondly, self-centeredness and detachment from society. The orientation for a way out from such dangers should be the generation of an autonomous political agenda by the movements and the formation of an empowered pole of social antiauthority. At any rate the upcoming parliamentary elections constitute in this juncture just one moment in the condensation of social antagonism. These elections will initiate a compressed period of time, in which new syntheses will materialize in a context of extreme social polarization.

Far from disappearing from the stage of history, the social and value crisis and its concomitant economic aspect expressly and incessantly stress that the whirlwind of this crisis will deepen unabated, pulling to its core any illusions of representation or assimilation of difference under a new hegemonic block of authority.

In this framework any dilemmas between the pro-Memoranda and anti-Memoranda stances, between private/state management and alternative routes to growth conveyed by the dominant discourse as the main stakes in present-day political contention constitute bogus references the governmental plans of the Left sooner or later shall be confronted with. The omnipotence of the economy in all aspects of public life has reduced the role of the state to the level of a mere manager of financial dictates, resulting in the disconnection of a great part of the body politic away from political party and trade union bureaucracies, as they increasingly lose the role of the agent of incorporation of the social movement. Be that as it may, this in no way means that the politics of assignment will be crushed; on the contrary, it leaves loci open for challenge in which new individualities institute innovative autonomous communes of direct democracy, while the state terminates the social contract and perpetuates its disjunction from society. What is at stake now is for society to push for demands, to be applied through society in ways envisioned by society.

In its attempt to distill the fundamental significations emerging from the pubic spaces of the condensed contemporaneous historical course, the Antiauthoritarian Movement in its Eleventh Panhelladic Conference held between 16 and 18 January 2015 at the “Nosotros” Free Social Space proposes the following directions for social struggles:

Degrowth
All diversions in the courses of the Aöos and Ahelöos rivers should stop now; likewise, all mining operations in the Skouries (Halkidiki) goldmines should be scrapped forever. Inextricably connected to Western cultural modernity, the imaginary of growth has haunted the entire socio-historic domain of the current era as well as the contemporary human intellectual make-up, by striving after endless development of production and consumption as the necessary condition for the attainment of happiness. This linear rationality of progress, the deification of rational domination and the neutral qualification of technology have led to the wasting of natural resources, the collapse of the planetary ecosystem and the dissolution of social bonds and local traditions, as economic development is inexorably pushed to its limits. The theoretical and practical critique of the foregoing notions make imperative the alternative for radically new social institutions and new anthropological types driven by the direct power of the people in all aspects of social life and organizations on the basis of self-control and degrowth.

The Commons
Free, public and social management of waste materials, water, and energy; abolition of the logic of patents and the privileging of intellectual work.
As they comprise the sum of socially produced wealth, all kinds of material, natural, social and intellectual resources will never become the Commons unless a free, social and public space is designed for the planning, organization and the construction of institutions that make equal access, sharing and participation in the production of common wealth possible. Through the struggle for the promotion of common goods we may overcome the opaque and false dichotomy between the state and the private sector, since the appropriation of resources for the constitution of the Commons will be implemented through their emancipation from existing rights to private or state ownership and specifically through the affirmation of the common-use, inalienable and non-commercial character of such goods.

Labor and the Social/Solidarity Economy
The contested demands for the emancipation of labor from its present-day oppressive condition are: on the one hand, the restriction of the economy in all spheres of common life; and secondly, the formation of free, social and public markets in which culture, education, communication and the economy are to be produced under decentralized conditions.

Equality
Full and equal rights to immigrants; abolition of the concentration camps for migrants; no discrimination on the basis of gender and sexual orientation.
The continuous shift in the boundaries of social exclusion is perceived under the rubric of the nation-state as the exclusive natural unit of analysis of the collective, as the nation-state defines immigrants as illegal, since there is no law to recognize and protect migrating populations. Western states have been  instituted on the basis of multiple boundaries within society, as they wage legal and institutional civil wars that allow the physical extermination of all those unable to be inducted into the system.

Resistance to State Totalitarianism
Abolition of all Class C maximum security prisons, all anti-terrorist laws, the Penal System Code and riot police units. Disarm the police now.
Detainees find themselves in the direst position when it comes to their expression and challenges. The increased subsumption of the so-called “Criminal Code of the Enemy” into Greek legal procedure characterized by exclusion of specific categories of social subjects from any legal guarantee or rights is now being consolidated through the enforcement of the Class C maximum security prisons legislation bill and the totalitarian measures that are arriving in its wake.
Αναρτήθηκε από Σ.Μ.Σ. στις 5:42 π.μ.